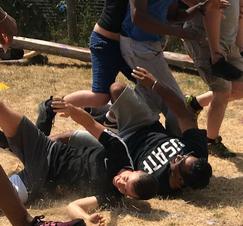 ​Our annual Sports Day this year saw children, staff, parents and visitors enjoying many fun games, along with much needed cold drinks and a bountiful barbeque.
As the sun fiercely shone on the scene of a running track marked on the scorched summer grass, in front of children’s art work displayed all along the fence, two drummers beat an encouraging rhythm as staff as children and visitors took part in races and challenges.
During a staff ‘piggy-back’ race (above photo), two members of staff fell spectacularly, wiping out the majority of the other race participants! Nobody was hurt but everyone laughed uproariously.
Eric was unavailable for comment.
At the end of the straight running track sat a large inflatable assault course –useful for over enthusiastic runners to fall on to–, and beyond that an equally large inflatable slide which featured in the activities.